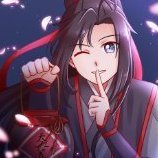 I asked that in Q&A couple years ago, it's pretty much a one sided visor. She can see just fine.