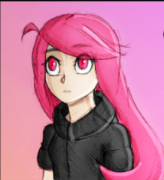 Important note: the download links in this thread are the only official download links and the only ones that can be trusted to be up to date. There are other game-hosting sites that made their own cu

The final episode of Spork is now publicly released!   I started working on Spork in late May of 2015, and didn't think I'd get this far. I had no experience with any part of game-making, an

Due to some scary stuff that happened yesterday, I'm back early. I'm safe now and am very happy to be back home 😄    Here are some drawings I meant to post some time ago. A little after Stra