I can't go to the 7th street for some odd reason 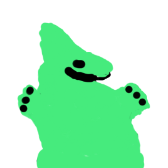 By Gritz,
May 14 in Troubleshooting