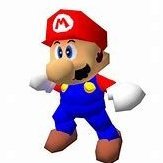 By chaotic_crusader,
March 28 in Reborn City