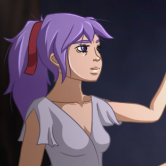 Hi guys! I wanted to make a follow-up post regarding some of my theories. I've just replayed the entire game, and there were a lot of changes in the pre-v13 story that took me off guard. I think the d