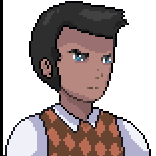 Welcome to the world of Postscriptum.   Follow the steps of the protagonist, a melancholic young adult stricken by unemployment and paralyzed by a chronic care-free and lethargi